Telugu speaking families living in UK grandly welcomed the Telugu new year ‘Manmadha Nama Samvatsaram’. This event was organized by Telugu Association of Reading & Around (TARA) in Reading, UK. With over 300 people in the hall there was festive atmosphere everywhere, the stage decoration, colourful lightings added charm and beauty to the event hall ‘Shehnai’ and the members were greeted by TARA welcome desk volunteers with smiles and were offered Ugadi Pacchadi before directed to main venue hall.
Ugadi event started with Ganapati slokam performed by TARA Committee member, Venkat Para who later wished everyone a happy Manmadha Nama Samvastaram. Venkat welcomed Cherry Naidu and Raja Vasista to lead the anchoring part for the event. TARA President Lakshmi Maturu lit the lamp to start the event programmes. Programs during the afternoon varied from classical dances to dhamaka songs with mix of oldies, socio-fantasy skits, and dumb dance. A number of classical dances were performed by kids and adults.

Kids/students trained from Manavata, Smt.Vidya/Smt.Jyotsna Prakash rendered various devotional & classical music-based songs, and performed classical dances/skits, which were very well appreciated by audience. It is usual practice for Telugu people to listen to Panchangam, Raashi Phalalu on this new year day and this year, the same panchangam/raashi phalalu were rendered by kids learning Telugu from ‘Mana Maata’ course – members could not resist to appreciate the way how kids presented this and some kids also explained the importance of Ugadi pacchadi and how do we prepare pacchadi – all from Mana Maata course kids, their cute English accent with Telugu words was the best combination that members cannot forget and claps were all around in appreciation to kids and those who supported (Ravikanth & Surya Prakash). Seeta Swayamvaram skit, GangaBhageeradha dance-skit, Bharatanatyam dance, Songs, Medley dances performed by kids were among the highlights.

Singers Ramprasad Devarakonda, Swathi Reddy & Suresh Paluri enthralled the audience with their melodious and fast-beat songs. Kuchipudi dance performed by Smt.Vijayalaxmi on copper plate was one of the key bits. Audience of all ages enjoyed their performance.

TARA Ugadi Puraskaram (‘Life Time Achievement’) award was awarded to Srinivasa Alluri, Founder & President, Manavata, for his contribution to human society through various charity events. Ugadi Puraskaram was presented by Chief Guest, Deputy Mayor, Sarah Hacker, and Guest of Honour, Reading West MP, Alok Sharma and was received by Mrs.Uma Lade & Mrs.Jayathi Bommana on behalf Srini (Sri.Srinivasa Alluri) who could not attend the event as he was tied up with another event in UAE. Madam Sarah Hacker, and MP Alok Sharma expressed their happiness to be part of this New Year event. Madam Sarah Hacker, wished members and among other things addressed, she explained how important is mother tongue language for kids to pick up & master any secondary language and appreciated the efforts of TARA (credit goes to Mr.Ravikanth Vakada, & Mr.Surya Prakash Bhallamudi who are teachers of Mana-Maata Telugu language course) in protecting and passing on the mother tongue to kids. Audience expressed their appreciation through claps, when Madam Sarah bowed and wished everyone with ‘Namaste’. Alok Sharma wished everyone Happy New Year and appreciated the contribution that Indians and TARA especially for contributing to community through various events. Both were presented TARA mementos by Mrs.Lakshmi Maturu.

TARA sponsors have set up stalls besides other jewellery stall and during lunch hour, members had opportunity to understand the offerings from different sponsors. Main sponsors for the event were AccuLegal, Red Ribbon, Oasis Accountants and Associate sponsors were State Bank of India and Kandala Travels. During this hour, families met their friends and made new friends. Some of the families who were present for the first time said they never imagined celebrating Ugadi with so many Telugu speaking families so far from home.

Series of programmes performed by adults boosted the audience enjoyment. Dumb-Dance was performed by adults, dressed in eye-catching matching colours, for various old and latest songs without expressions and with only making moments to translate the lyrics/songs words into acting – members were seen enjoying thoroughly and laughter was everywhere. Socio-fantasy skit
‘Gandharagolam’ – make-up, dialogues, script, play, action, accessories, all were feast to those present. Medley dance performed by few couples and Hero’s, Chiranjeevi, Krishna, NTR and Rajashekar dance mannerisms, were apt imitated very well for medley songs which were among the highlights for the event. For all these programmes, the hall was rebound with thundering applause and shrieks of joy.

Overall, there was a very good variety in the themes chosen and participant’s ages. The jubilant atmosphere brought reminiscence of celebrations back home with family and friends. 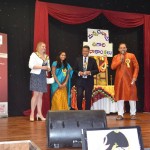 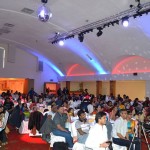 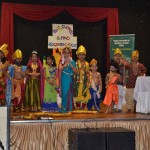 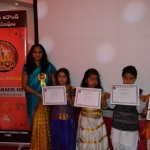 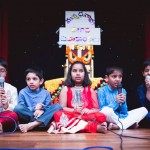 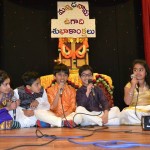 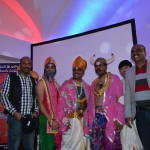 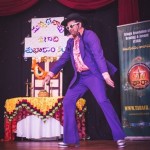 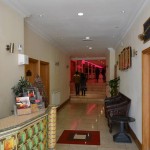 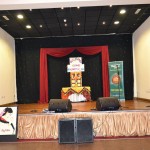 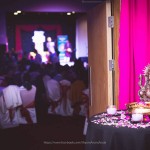 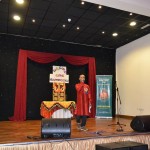 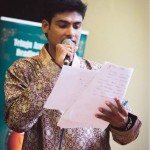 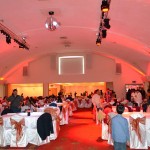 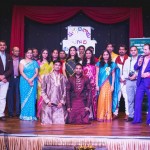 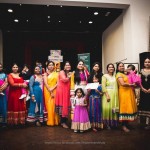